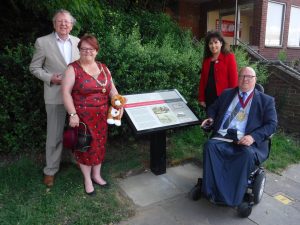 The Friends’ ninth interpretation board was unveiled on 17 June 2017. The honours were performed by the Mayor, Cllr. Gerard Oxford and a representative of the board’s sponsors: Melinda Simpson, Director of HainesWatts Chartered Accountants
The board is just outside HainesWatts’ offices on Balkerne Hill. It tells the story of the damage to the Wall and to St. Mary-at-the-Wall Church tower during the 1648 Siege of Colchester.
It also busts the myth that the nursery rhyme ‘Humpty Dumpty’ was based upon a Civil War cannon positioned on the church tower. Sadly there is no evidence for this nice tale.
The board also has an illustration showing how this part of the Wall used to look – with houses in front of it. These were only demolished in the 1970’s so
in some respects our Wall is being better displayed now than it has been in the past.