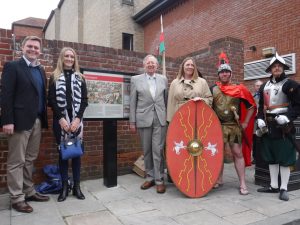 The latest interpretation board was unveiled in Sir Isaac’s Walk on Saturday 22 April by Colchester’s MP, Will Quince, accompanied by an honour guard. The board was installed near to the site of the 1648 Battle of Headgate and features a specially-commissioned painting of what happened that day created by local artist Roger Massey Ryan.
The bloody encounter took place right at the start of the devastating siege of Colchester in the English Civil War. On 13 June 1648, Parliamentarian forces attempted to break into the town through the Head Gate but were repulsed by the Royalists inside.
The board was sponsored by the local solicitors’ firm Ellisons to mark their connection to the battle. During the siege, the building which now houses their offices was used to hold prisoners of war. The illustration on the interpretation board shows a white flag flying over it – to warn the besieging forces not to attack it. Ellisons chose to sponsor the board to mark the company’s 250th anniversary.